Only three more to go!

I can’t believe that I can see the end of this massively long series from here!

I started the Scandalous Scions series on May 11, 2017, with the release of the prequel, Rose of Ebony. In just over two years, there have been 10 books released in the series, the prequel, and the story bonus, Lost at Sea, for subscribers.

If you haven’t read any Scandalous Scions books, or any of the previous series, Scandalous Sirens, the bonus story won’t have a great significance for you. If you have, though, you’ll love this little visit into the history of Natasha, Elisa and Princess Annalies.

In the meantime, today is the release of Ashes of Pride, which is Neal and Blanche’s story. Only three more to go after this. The three all have titles, one is already available for pre-order, and I’m nearly finished the second. Check the list below: 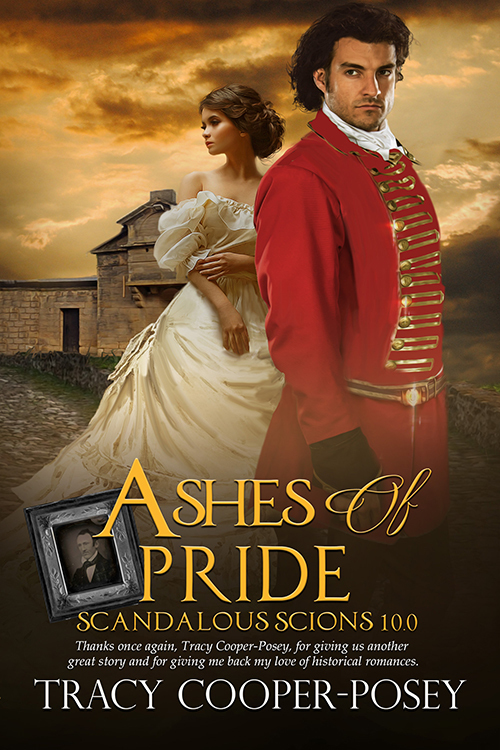 Married in haste, to the wrong man…

Blanche wed Lieutenant Colonel Seymour in search of a hero to replace the French military father she never knew, only to find herself stranded in Northumberland, in a penniless marriage, with no recourse.

Blanche’s cousin, Neil Williams, now a decorated Major, returns from the colonies to rejoin the Fifth Northumberland Fusiliers. Her husband, as Neil’s superior officer, makes Neil’s life intolerable, as well as her own.Blanche learns that the truly courageous are defined by their actions and that Seymour is not one of them, for what he does to Neil defies imagination…

This book is the tenth book in the Scandalous Scions series, bringing together the members of three great families, to love and play under the gaze of the Victorian era’s moralistic, straight-laced society.

Praise for the Scandalous Scions series:

If you are familiar with the previous series, I am sure you fell in love with the huge family like I did.

She is a go to author for me when I need a fix of historical romance.

Tracy Cooper-Posey takes us into the staid yet surprisingly bawdy Victorian Era where appearance is everything and secrets are held inside the family.

Thanks once again, Tracy Cooper-Posey, for giving us another great story and for giving me back my love of historical romances.

I love historical romances and this one filled all my likes, from a dashing, wonderful hero, a beautiful strong heroine, a love story to sigh over, side characters that are interesting, and funny, and move the story along.

I don’t often give books five stars, but I really enjoyed the mystery that puzzled all of the characters in this story.

A wonderful story set in the Victorian era of such strict social conventions and yet the main characters are shimmering with latent sexual tension. What a fabulous juxtaposition!

You can buy Ashes of Pride direct from me,
or from your favourite bookseller.

There are also a lot of promos and a massive giveaway happening in association with the launch, that features a $25 gift card to the bookstore of your choice. Click here for details about the giveaway.

Also, the first three books of the series are discounted for the week of release only:

My First Kickstarter…and it’s a doozy

This Month’s 20% Off Sale has Started!

This month’s 20% off Everything Sale has Started