I do a lot of research and reading. From weird facts blog sites to historical textbooks to Wikipedia — yes, I actually read Wikipedia. I have it set up to give me a random article page each day. Sometimes, I find the article interesting enough to start clicking the related links and following the rabbit hole downward.

BTW, you can ask Wikipedia for a random page whenever you want, too — there is a link in the main menu on the left side of any page. Click it and Wikipedia will randomly choose a entry for you. It’s great fun if you have a curiosity bump as large as mine.

This reading and research shows up in my books–sometimes years later. Sometimes it’s very immediate. You may have noticed, lately, that Revolutionary France and Paris have shown up as settings a few different times, lately, here and there. That’s because I’ve been reading a lot of French history lately. Why? Because I backed into it, actually.  The Scandalous Scions series has a book that involves 19th century Paris, and I suddenly had to read up on that era and location. Which led me to roam backwards and forwards through Parisian history by a couple of centuries.

Sometimes, I add in throwaway characters with histories for which I know nothing. I did that with Remi in Kiss Across Worlds–I made him French, a noble and a survivor of the Revolution. Then he turned into a major character, and I had to dig even deeper into French history to build a proper backstory for him.

Because in the first book of the Project Kobra series, Hunting the Kobra, I blithely described the bad guy, Aslan, as a Ukrainian. For that book, I did a quick hour of research to make sure his history held up.

For book three, which I’ll get to in a minute, the good guys had to head into Ukraine to follow up on the lead which was dangled in book 1, in their ongoing mission to find the Kobra.

BTW: Do you keep wanting to correct me by saying the Ukraine? Yep, me too. I grew up with the Soviet-controlled “region” being called the Ukraine. When Ukraine shrugged off the Soviet leash in the late 80s, they also dropped the “the”. It’s now considered a bit of a faux pas to say the Ukraine, these days. Ukrainians feel it is a rude reminder of the country’s inclusion in the USSR. But old habits, and all…you’ve no idea how often I have to back up and delete the “the” in front of Ukraine when I type the name!

There’s also a growing custom to spell the capital of Ukraine as Kyiv instead of the old style Kiev. But that’s not as widely accepted as dropping the “the” for the country name, so I have continued to use Kiev (for now).

Anyway, the good guys head to the Ukraine….yeah, and suddenly I had to do a lot of research, because Ukrainian history was a complete blank for me. The only thing I knew about the country was the Chernobyl nuclear disaster and that they separated from Russia and got back their independence when the USSR collapsed.

Actually, I know enough to know that if the country wasn’t so shaky, politically, right now, I would love to visit. I’d love to see the painted houses, at least. Check this out:

This is the Vozdvyzhenka district in Kiev. It’s pretty upmarket, but it’s a great example of the Ukrainian attitude to the traces of the USSR that linger in their country: They paint it.

There are whole high-density districts that have been painted, too:

Isn’t it amazing? There are much more you can browse through here, too.

Anyway, I got to know Kiev very well in the last few weeks. Who know where else those painted houses will pop up in my books! 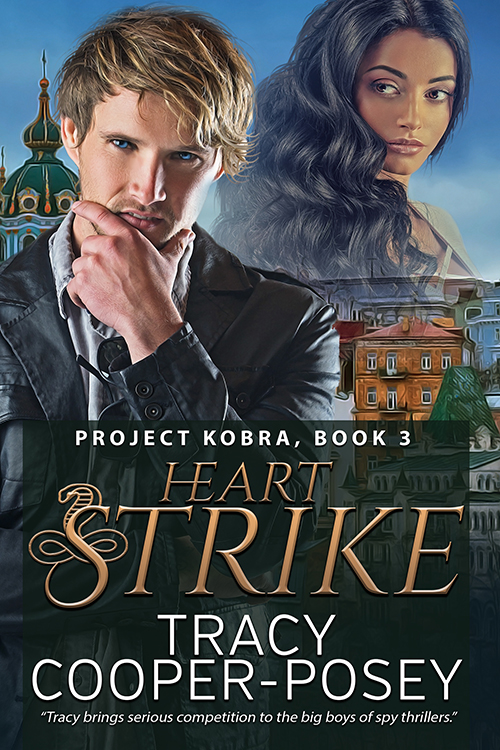 She’s American, he’s Russian. No one wants them to be together.

As a victim of the Kobra’s bomb, and with unique access to classified information, Fabian Santiago isn’t content with justice being delivered someday. When the Seven Seas unit bogs down in trivia she heads to Ukraine to find the Kobra herself.

When she falls—literally—into the arms of Mischa Sokolov, a charming Russian living in Kiev, their affair is so heated she is distracted from her very personal mission…until she leans that Mischa is not quite what he seems, and that her coming to Ukraine is shaking apart decades old conspiracies…

This romantic thriller is the third book in the Project Kobra series.

Praise for the Project Kobra series:

Just when you think you know exactly where the story is going she steers it in the opposite direction.

Every time I thought I had it figured out another twist or turn would make me second guess and start to suspect someone else.

An unbelievably good book! It is fast moving with so much going on that you will never want to put this book down.

Tracy Cooper Posey once again proves why she is a master at the Romantic Thriller genre.

What a whirlwind adventure! I never saw that coming and now I’m stuck in another series! Awesome!

What do you think? Did I dangle the carrot well? 😉

Heart Strike will be released in January, and it is already available for pre-order (and some of you are way ahead of me and have already grabbed your copies–thank you!!)

Buy HEART STRIKE directly from me,
or from your favourite bookseller.

Take my stories on a test run.  4 full novels free.  Sign up below.

My, How Movies Have Changed!

A Taste for Blood

A Samhain romance for Halloween